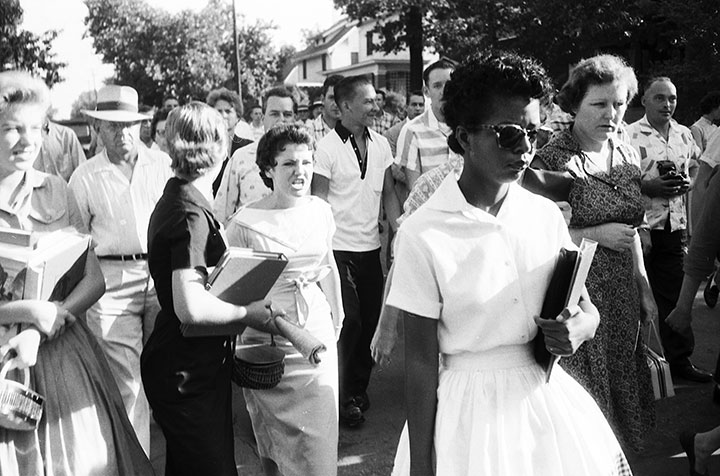 The numbers back it up: Since 1989, the percentage of New Jersey schools that have a white student population of between 0-1 percent (dubbed “apartheid” schools) has increased from 5 percent to 8 percent, according to the UCLA report. More than 25 percent of African-American students in the state attend one such school.

Ms. Mary-Claire Givelber, a mother in the WHS community, sees potential negative consequences for students who grow up in a school system that is dominated by one race. “You see people that don’t look like you and you don’t know how to react to them,” said Givelber. “You think that people who don’t look like you are really different from you.”

Mr. Corey Lowery, principal at Union High School, one of the more diverse schools in the state, believes that a school’s diversity is beneficial to a student’s educational upbringing.

“I believe growing up and learning in a diverse environment adds to the quality of education because learning will extend outside of the classroom naturally,” said Lowery. “Making friends with people from different backgrounds will invite you into their world.”

But naturally diverse communities are scarce in New Jersey. Twenty percent of public schools in the state have a white population of 10 percent or less, according to the UCLA report. So, what’s really going on here?

The answer is quite simple: There is an increasing rate of de facto segregation in New Jersey.

For those who don’t know, de facto segregation is not government-imposed segregation. Rather, it is the process by which one race comes to dominate the population based on practices that people have come to accept as reality.

Especially in New Jersey, the success of the school system serves as a major influence on home ownership; a better school system tends to raise the value of a home, and Westfield is a prime example of this phenomenon.

People care about the prices of their homes, and these factors account for the general economic and educational prosperity of New Jersey. Givelber is on board with this consensus, as she noted: “[The price of my home] is important to the extent of making an investment. When we go to sell our home, we want to feel like we’ve made a worthy investment.”

However, there is also a common fear among white residents that living among too many African-Americans and Latinos will hurt home prices, leading these white residents to move out of more diverse areas. This is the main contributor to today’s de facto segregation and such racial divides.

Givelber does wish, nonetheless, that Westfield was a more diverse town.

“If Westfield could be integrated and my kids could go to school where there was diversity, I would be over the moon about that,” she said.

This toxic cycle has been happening for the past few decades in New Jersey, especially in inner cities like Newark, Irvington and Plainfield; the list goes on and on of towns that have experienced this, known as “white flight.”

Science teacher Ms. Judy McLoughlin, who has lived in Plainfield since 1998, echoes this idea. “Plainfield was a part of white flight in the 1950s. This was a period in our history when thriving inner cities gave way to a shift into suburbia leaving cheaper rental rates, no real tenant protection laws and too often redlining areas or preventing people of color from moving onto ‘any’ street in a suburb,” said McLoughlin.

“People often don’t fully appreciate the role economics can play in a student’s education,” McLoughlin said. “Westfield has a limited amount of transiency; nor do the majority of students face issues with basics like food, clothing, internet and time to study used up by having part- or full-time jobs.” 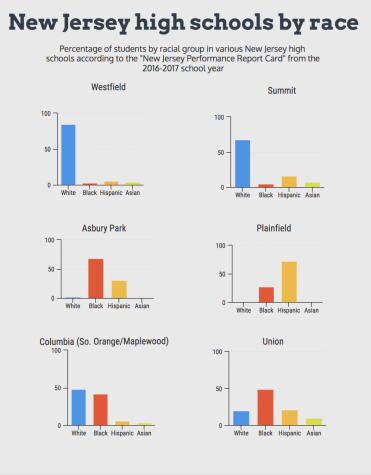 In Westfield, we have seen one race dominate the school system: white. The “New Jersey Performance Report Card,” a series of reports conducted every year by the New Jersey Department of Education, reported that WHS had an 84-percent white population in 2016-2017. The next highest percentage was Asian, at a mere 7.5 percent. In this same report, WHS was marked at having a 3 percent “economically disadvantaged” population.

In contrast there is Plainfield High School, just five miles from WHS, which is 72 percent Hispanic, 27 percent African-American and 0.1 percent white. The report card calculated 66 percent of Plainfield students to be “economically disadvantaged.”

And what does this all add up to? A 42-percent college enrollment rate 16 months after graduation.

But all of this makes sense in the context of de facto segregation. In 2015, New Jersey students living in poverty made up 77 percent of the enrollment in the “intensely segregated” schools, according to the UCLA report.

Mr. Stewart Carey, former principal of Roosevelt Intermediate School, has made note of the diversity problems he has seen in Westfield.

“Since we have a predominantly Caucasian staff in Westfield schools, students don’t see the accomplishments of other races,” said Carey. “Many African-American students don’t come back to Westfield after college. I’ve had some of them say to me, ‘Mr. Carey, I hate this town.’ ”

But what does all of this mean in terms of its effect on education?

It has become apparent that placing a student in a more diverse environment allows for that student to be more comfortable and at ease with his or her learning.

Senior Danny Howard, who is black, attended Cedarbrook Elementary School in Plainfield before moving to Westfield. He said: “It was more diverse [than WHS]. In history, I was more comfortable with topics that pertained to slavery and oppression since I didn’t feel like all eyes were on me when they came up. Not only in history, but in music and PE as well, I didn’t have to stand out.”

Beyond academics, the diversity of a school can impact the social life of a student.

Said sophomore Kurt Hu: “Diversity plays a vital role in shaping how students will interact with others. This may manifest itself in the social groups that one may be inclined to join in the future, perhaps in college or higher education.”

There are some exceptions in New Jersey of schools that are diverse and don’t have a majority race. Columbia High School, whose students live in the towns of South Orange and Maplewood in Essex County, was 48 percent white and 42 percent African-American in the 2016-17 school year, according to the “New Jersey Performance Report Card.”

“We believe that our students have a strong awareness of what the world is like and can navigate the world once they graduate because of what they’ve been exposed to [at Columbia],” said Ms. Elizabeth Aaron, principal at Columbia High School.

Aaron knows that Columbia is a true outlier in New Jersey in terms of its racial and socioeconomic diversity. “We have students that range from living in apartment complexes to $1.5-million homes,” said Aaron.

When it comes to any type of resolution to this lack of diversity in schools across the state, Aaron has her doubts. “About once every 15 years New Jersey tries to fix this problem and it never does,” she said. “They’ve never really tackled the issue head-on.”

America is built on the foundation of people coming together to solve issues. Should diversity in schools be a part of the solution?

“I believe America is considered one of the greatest countries in the world because of its diversity,” said Lowery. “Diversity lends itself to the creative talents of different cultures, which enables everyone to benefit.”