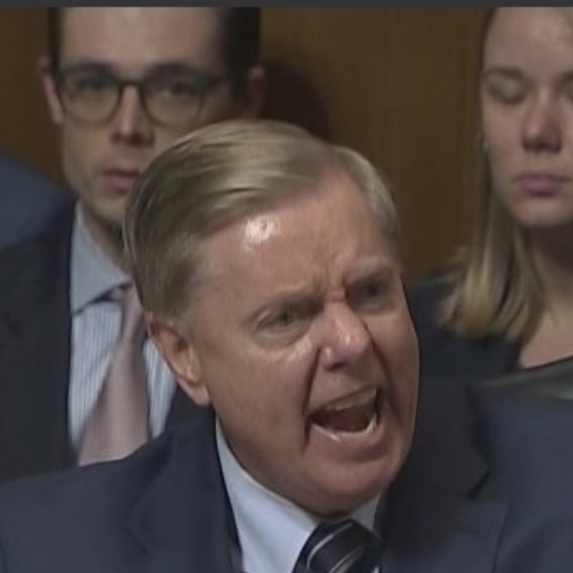 While I was canvassing last week, a voter told me he and his wife would not consider voting for a Democrat because “what the Democrats are doing in Washington is a disgrace”.  I bid my doorstep interlocutor a polite good day, and moved on. But I was seething, thinking this is all of a one with Lindsay Graham’s vituperative outburst about the Democrats “unethical sham.”

The “unethical sham” comes from Republicans, and the righteous hysteria on view has become the Republican stock-in-trade in response to any push-back to their right wing agenda. That primordial turtle, Mitch McConnell, blew up any remaining bipartisan consensus on Supreme Court nominations when he flat out refused to hold hearings on the Merrick Garland nomination. That was the first step in conservative plans to reshape the courts for a generation. He doesn’t give a damn about Christine Blasey Ford and her accusation.  He wouldn’t care if Kavanaugh followed Trump’s playbook and stood in the middle of Fifth Avenue and shot somebody, Kavanaugh has got his vote.

Indeed Kavanaugh DID follow Trump’s playbook in his shrieking defense on Thursday.  Here is a Trump quote from Bob Woodward’s book “Fear”: “You’ve got to deny, deny, deny and push back on these women. If you admit to anything and any culpability, then you’re dead.” Sound familiar?

In Kavanaugh’s extraordinary rant, any shred of pretense that we can expect judicial impartiality from him was ripped away.  This is a man who is hand-picked to rubber stamp the Trumpianagenda. And he can start right away through his vote in “Gamble vs. U.S.” in October. That decision could allow Trump to pardon all of his associates who have pleaded guilty in the Mueller investigation, and protect them from separate state-level criminal prosecutions. And Lindsey Graham’s crepuscular colleague on the Judiciary Committee, Orrin Hatch, filed a brief to the court promoting just that outcome.

You know what I think? What Republicans are doing in Washington is a disgrace.  On November 6, we need to get off our doorsteps, get to the polls, and throw them out.  Leonard Lance goes first.