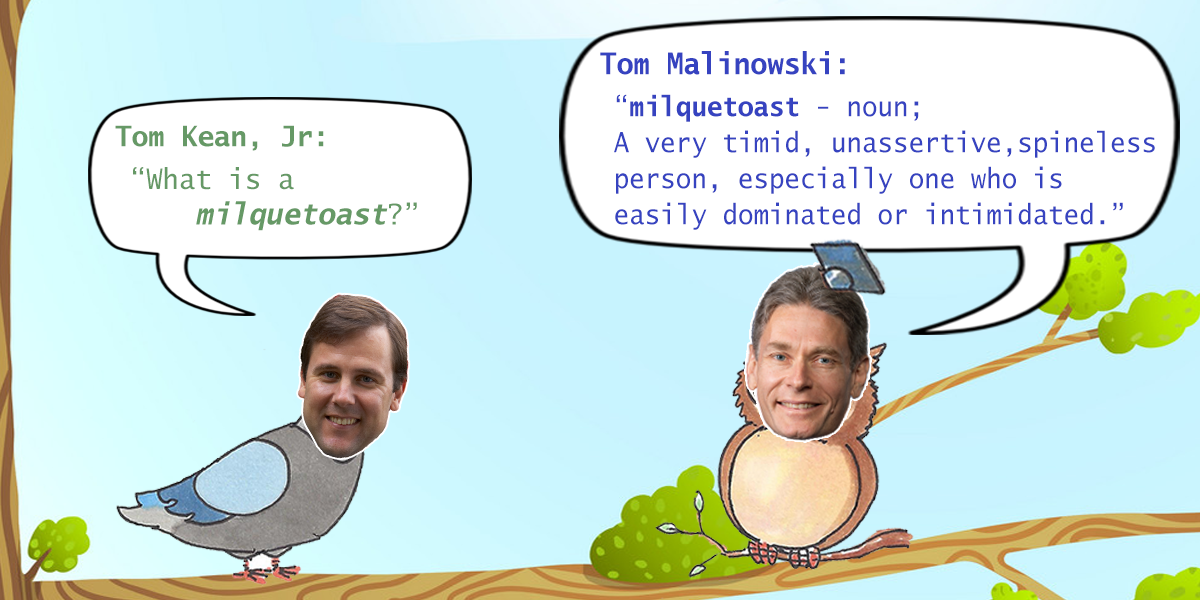 The Republican’s plan for NJ07 in November is to try to convince the electorate to let go of the substance that is Tom Malinowski for the shadow that is Tom Kean, Jr.  As usual, they want JAM on it. What’s JAM? Just Another Milquetoast, another in the line of NJ07 Representatives that go back through Leonard Lance to Mike Ferguson.

Empty suits mouthing pious platitudes about reaching across party lines, “consensus builders” offering up a vision of cross-party collaboration, a vision that was effectively destroyed by their own party.

Tom Kean, Jr. fits right into this model. Look at his laughable proposition that he can persuade his leadership to restore the SALT deduction! Give Leonard Lance a call. How did that go down when Republican donors made it clear that the piper must be paid in full for supporting Trump in 2016? Republican leadership has pulled off the conjuring trick of painting Blue State donors like us as tax-and-spenders. Yup, we get taxed, and Mitch McConnell spends...in Kentucky. Those red states are the big recipients of those Federal tax dollars they fulminate against.  Do you think Tom Kean, Jr. is the person to fight that battle?

If you do, I have a tunnel to sell you. Which reminds me—the Gateway Project.

Kean thinks he can unpick the lock to get that funded?

Where was he when Christie canceled the ARC project? Mouthing the party line, of course, about costs and taxes. And now—at a time when ARC would be open—he’s got religion about infrastructure spending. The politics of expediency, the hallmark of his 20-year tenure in Trenton.

This is the man who says “it's so important to me that we maintain our environment.” Blithely unaware of the wrecking ball that Trump and the Republicans have taken to the regulations that guarantee the quality of our air and water. Pretending Trump does not exist in this election does not absolve Kean—or any Republican—from the culpability they bear for the assault on the environment, and also on our system of values based on belief in the rule of law that even the President of the United States must respect.

Sending a sycophant to Washington may fit in with the values of the Republican Party, but we have seen what leadership looks like in NJ07, and we want more Malinowski!