Lance Falsely Claims to be an Eisenhower Republican 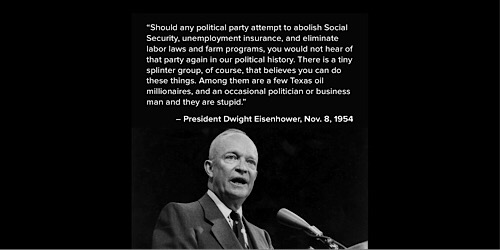 Eisenhower Republicans Are Extinct and Leonard Lance Would Like to Keep it That Way.

In a recent interview with Fox News, Congressman Lance was asked if he is a "Trump Republican.” “No. I'm an Eisenhower Republican," he said, hoping that a misty mantle of remembered 50’s prosperity would cloak reality.

Who were those Eisenhower Republicans? The Eisenhower Republican Platform of 1956 summarizes the accomplishments of the previous four years, and the promises made for the future.  Back then, Republicans raised the minimum wage and promised to “extend the protection of the Federal minimum wage laws to as many more workers as is possible and practicable.” The official Republican position today is that minimum wage issues are best handled at the state and local level—which local efforts are then obstructed by said party.

Back then, the Republican Party boasted that “the protection of unemployment insurance has been brought to 4 million additional workers.” Yet when the Senate voted in bipartisan fashion in 2014 to move forward with a bill that would restart federal unemployment benefits for the long-term jobless, the House voted it down, and Lance’s spokesperson said that “the congressman believes the Senate bill is unworkable.” The New Jersey unemployment rate stood at 7.1% at the time.

Back then, the Republican Party  was proud that under Eisenhower, “unions have grown in strength and responsibility, and have increased their membership by 2 million,” and declared that “the protection of the right of workers to organize into unions and to bargain collectively is the firm and permanent policy of the Eisenhower Administration.”  The Republican Party since then has constantly and consistently whittled away at the rights and protections of unionized workers, to the profound disadvantage of middle class America.

Back then, the Republican Party platform stated that “Republican action created the Department of Health, Education and Welfare as the first new Federal department in 40 years.”  Now we have a Department of Education, headed by Betsy DeVos, who demonstrably knows shockingly little about the U.S. education system.

The truth is, Eisenhower Republicans are as dead as dodos and Leonard Lance has no kinship to this extinct species. Congressman Lance supports Donald Trump 88% of the time.

And we will #RememberinNovember. #NJ07