Lance Looks Away as Corrupt Trump Family Enriches Themselves 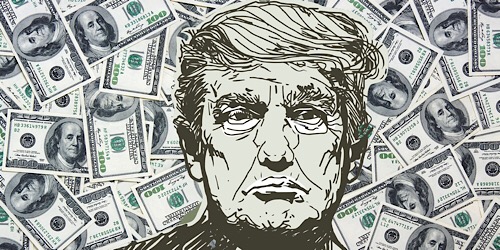 When Fact Meets Fable:  “The Ass and its Purchaser.”

Aesop’s Fable, “The Ass and its Purchaser,” is the source of the aphorism that you can tell the character of a man by the company that he keeps.  Our Congressman, who said that “Donald Trump will have my enthusiastic support,” should read it. He has embraced an administration that has become a byword for venality and corruption.  What does that say about the enthusiastic supporter?

Trump never separated himself from his business, managed day-to-day by his adult sons, with whom he is in regular contact and who also work as leading members of his political operation.  Trump doubled the fee for admission to membership of his private club at Mar-a-Lago, where the wealthy can lobby for his support and simultaneously create a cash cow for the President. And when the Republican National Committee hosts fund-raisers at Mar-a-Lago, his supporters’ political donations are also transformed into revenue for his business.

You don’t have to go to Florida to buy the President’s ear of course.  Try Trump International Hotel in DC. It is described as “a dealmaker’s paradise for diplomats, lobbyists and insiders.” Donald Trump Jr. heads the company that controls the hotel. His father owns 76% of that company.

How about son-in-law Jared, who negotiated a half-billion-dollar in loans with two companies seeking to curry favor with the White House?  US intelligence agencies have reports of multiple foreign governments discussing ways to use Kushner’s business interests to compromise his work for the federal government.

Trump has surrounded himself with people unburdened by legal or moral scruples. At least seven current and former officials in Trump's 24-member Cabinet have faced accusations of abusing the perks of their office.

And as for Federal agencies, at least 187 Trump political appointees have been federal lobbyists, and despite Trump’s campaign pledge to “drain the swamp,” many are now overseeing the industries they once lobbied for.

There is more, much more than can be put in a 350 word blog. We haven’t even mentioned Russia! Yet the Republican Party looks away.

Is this “principled conservatism,” Congressman Lance?  No!! We will #RememberinNovember.