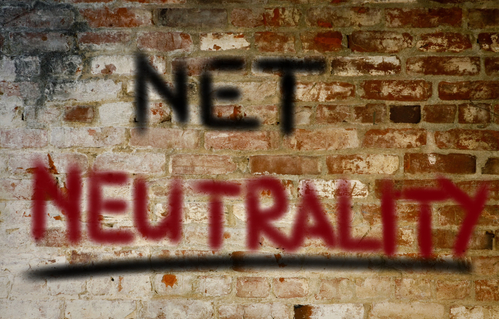 Net Neutrality is free speech for the 21st century, the ability of individuals and organizations big and small to communicate their ideas online. It's as simple as that, and any efforts to curb net neutrality is an attack on one of the founding principles of this country. We aren't the only ones saying this - organizations that cherish and defend free speech support this view.  Consider the views of the American Civil Liberties Union, the American Library Association, and the Electronic Frontier Foundation:

"'Net neutrality' is the principle that internet service providers (ISPs) must treat online data equally, by not discriminating based on user or content. It is essential to the free, open internet that we know and love. Without equal access to the internet, we lose our rights to be heard and to hear others. But, today, net neutrality is under threat."

“Preserving net neutrality is essential for equitable access to online information and services and thus a vital concern for our nation’s libraries. Now that the internet has become the primary mechanism for delivering information, services and applications to the general public, it is especially important that commercial Internet Service Providers are not able to control or manipulate the content of these communications. Libraries, our patrons and America’s communities will be at risk if the FCC repeals all protections contained in its 2015 Open Internet Order with no plans to replace with any enforceable rules. We strenuously disagree with the FCC’s actions and will continue to advocate for essential net neutrality protections.”

"Because the (FCC) draft order repeals net neutrality rules altogether, it allows ISPs to block or throttle lawful content, or give the highest-paying websites and apps a better ability to reach customers’ devices, or to favor Internet traffic from the ISPs’ own subsidiaries and business partners, all without any legal repercussions. It paves the way for an Internet that works more like cable television, where wealthy insiders decide which speakers can reach a broad audience. A pay-to-play Internet means that smaller sites and apps, or startups without major funding, will be forced to negotiate with multiple ISPs to avoid their content being buried, degraded, or even blocked."

But Congressman Leonard Lance does not see things this way:

"The Federal Communications Commission has voted in favor of a net neutrality plan that is the most dramatic government intervention in the Internet in two decades.  The FCC’s proposal to regulate the Internet will hurt consumers and discourage new investment and innovation in broadband.  It is Congress, not an unelected federal commission, that is tasked with modernizing our Nation’s telecommunications laws and today’s action is a blatant overstep of authority that threatens to stifle one of the Nation’s most important economic engines."

And here is Lance explaining his position at a May, 2017 town hall:

Notice that Lance does not once mention the interests of the public and the importance of net neutrality. It does not even cross his mind. Maybe that's because these figures are crossing his mind:

Donations to Leonard Lance from Telecom and Telephone Utilities

Without net neutrality, Comcast, Verizon, and others will be allowed to charge extra for dissenting voices - like yours and like ours and everyone critical of this administration - essentially putting them on mute.

Ajit Paj, a former Verizon lawyer appointed to head the Federal Communications Chairman by Donald Trump, sides with Lance on this issue, and there's a good chance, despite the calls and the rallies, that the FCC is going to vote to take away net neutrality.

Lance may play a moderate on television but he supports the Trump agenda over 90% of the time. When the GOP has enough votes to pass regressive legislation, they let Lance cast a  dissenting vote to burnish his moderate image. Let us not forget this in November.

Trump and the GOP are systematically attacking all the progress that we've made in the last fifty years and fake moderate Leonard Lance is part of their scorched Earth plan.