The Creatures from the Red Lagoon 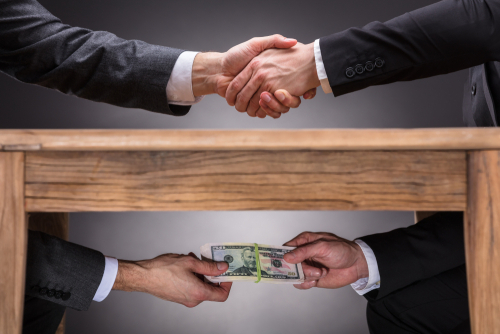 Donald Trump came into power on a populist wave, promising to “drain the swamp.”  How long before his supporters realize that his promises were empty and that enrichment of his ego and his bank account are his only priorities?

He talked about a system “rigged” for the rich. He fulminated about self-serving politicians operating on the whim of lobbyists. He railed against hedge fund managers avoiding paying their fair share. He knew, he told us, because he was a poacher himself, and he was going to turn gamekeeper to protect us, the middle class from the predations of the wealthy. He would, he told us, pass a tax bill for the middle class.

Instead, we saw a feeding frenzy of Republican donors who made sure that all those rich insiders, who were supposedly going to be punished for their avarice, would carry away more than 80% of the tax plan’s benefits, while the rest of us get bupkis. So intense was the last minute lobbying that the Senate bill contained  hand written annotations in the margins.

And our President and his family are massive beneficiaries, to the tune of hundreds of millions of dollars through the “pass-through” deductions, real estate provisions, estate tax changes and top-rate tax reductions.

Now we are to be subject to a multimillion dollar advertising campaign, funded by same Koch brothers who lobbied furiously for this legislation, to persuade us that this medicine will indeed be good for us.  Meanwhile, Paul Ryan is already telling us that less medicine is in our future-- those pesky healthcare entitlements stand between us and prosperity. Whose prosperity?

Look for the stamp of the Koch brothers’ influence machine, Americans for Prosperity (AFP), on attempts to sell you on this scam.  And remember that our own Congressman, Leonard Lance, who acts the part of a moderate on TV, earns an impressive 83% approval rating from AFP!

That swamp that needs draining?  It is a red lagoon!  Join us in banishing these creatures and restoring the promise of American democracy.