The Truth About Leonard Lance

According to Web Archive June 5th 2014, Leonard Lance’s website boasts the following about his record (see below). During this campaign season, Lance proudly claims he is a defender of healthcare, the environment and a true bi-partisan. He also says that a change to the corporate tax cut would cause a recession but does not acknowledge that it is fueling an out of control deficit which will ultimately result in CUTS TO SOCIAL SECURITY AND MEDICARE. He suggests a solution to this deficit is to RAISE THE RETIREMENT AGE TO 67.5 YEARS. In 2014, Lance shows us a different candidate and one that earns his recent endorsement from the TEA PARTY EXPRESS. We believe Lance changes his brand in order to SIMPLY WIN AT ALL COSTS. Is he a principled leader who stands by his convictions or does he say ANYTHING to gain re-election? Maybe this is why Paul Ryan’s SUPERPAC is filling the airwaves with negative ads. Have you had enough?

The citizens of NJ7 need change. We deserve better than this. 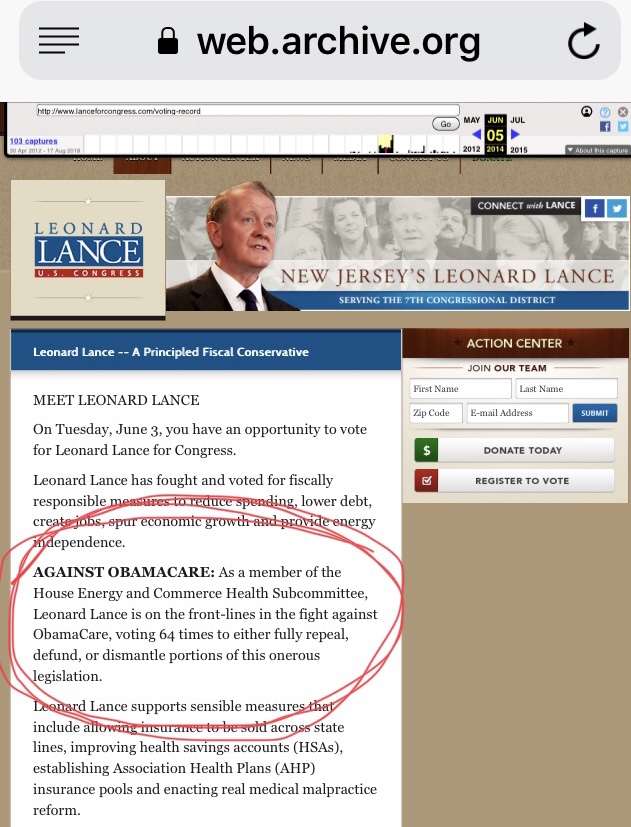 On Tuesday, June 3, you have an opportunity to vote for Leonard Lance for Congress.

AGAINST OBAMACARE: As a member of the House Energy and Commerce Health Subcommittee, Leonard Lance is on the front-lines in the fight against ObamaCare, voting 64 times to either fully repeal, defund, or dismantle portions of this onerous legislation.

FIGHTING AN IMPERIAL PRESIDENCY: Leonard Lance joined fellow conservative lawmakers in voting to rein in an out-of-control executive branch who has far exceeded its constitutional limits at nearly every turn. Leonard Lance also voted to stop Obama’s Internal Revenue Service from attempting to silence American citizens who merely seek to exercise their constitutionally-protected right to freedom of speech.

SUPPORTS AMERICAN-MADE ENERGY: As New Jersey's only Republican member of the House Energy and Commerce Committee, Leonard Lance is committed to an “all-of-the-above” American-made energy policy to help bring down fuel prices, create more jobs and reduce our dependence on foreign energy.

SUPPORTS KEYSTONE PIPELINE: Four times Leonard Lance voted to approve the Keystone XL pipeline that will bring secure energy to America, support the creation of thousands of jobs, and help bring down prices at the pump.

FIGHTING FOR A BETTER ECONOMY: Leonard Lance voted for fiscally responsible proposals that will bring growth, prosperity and certainty to our economy. And Lance has voted for proposals that lift bureaucratic hurdles, red tape, and cost burdens that have hurt New Jersey’s small businesses.

LOWER TAXES FOR NEW JERSEY: Leonard Lance voted to renew all the expiring tax cuts for 99 percent of New Jersey taxpayers and has been a vocal opponent of the President's plan to raise taxes on New Jersey's families and small businesses. Leonard Lance voted to eliminate the "death tax," voted to cut business taxes by 20 percent and cosponsored legislation to repeal the Alternative Minimum Tax (AMT). And on tax reform Lance voted for a plan that calls for a simpler, flatter and fairer tax system that will restore economic opportunity and prosperity to our Nation's economy.

VOTED FOR RESPONSIBLE BUDGET PLAN: As a strong fiscal conservative Leonard Lance has voted for “The Path to Prosperity" that balances the federal budget in a decade, cuts wasteful spending, reins in our national debt, harnesses domestic energy, restores patient-centered health care, strengthens retirement and safety net programs and reforms our tax code. Leonard Lance also voted for "Cut, Cap and Balance" that brings our budget into balance in five years.

SUPPORTS A BALANCED BUDGET: Leonard Lance voted for a federal balanced budget amendment to the U.S. Constitution and is the author of the Lance Amendment to the New Jersey State Constitution that prohibits further state borrowing without voter approval.

STOP THE SPENDING: Leonard Lance has always fought against wasteful government spending, opposing the $1 trillion stimulus, the 9,000-earmark omnibus spending bill and President Obama's $3.6 trillion budget. And Lance was one of the first Republicans to reject earmarks and authored legislation to repeal the wasteful ethanol subsidy.